Settled in the midst of the Tuscan apennines, in the province of Pistoia, Abetone is well renowned for being one of the most popular ski resort of Central Italy, thanks also to the recently renovated ski lifts.

1 Properties found: All accommodation in Abetone 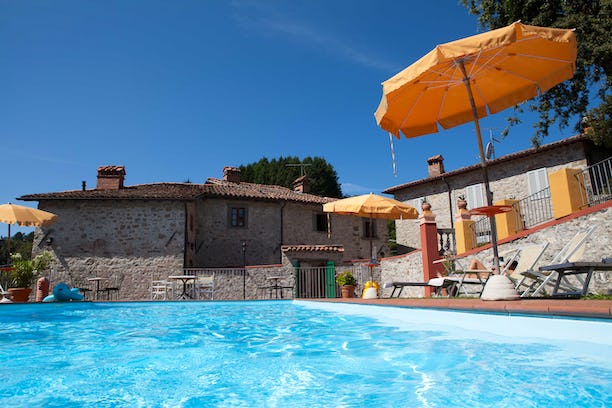 Located in the Apennines in northwestern Tuscany, the farmhouse is a perfect accommodation for a relaxing holiday in touch with nature native to the Tuscan mountain. The farmhouse offers 6 apartments and a large swimming pool.

Everyone in Tuscany knows Abetone as the most famous regional ski resort, so popular that, when the first snow falls down, impatient people coming from everywhere can’t wait for riding the white slopes for firsts!

Abetone, not only ski

Abetone, located among the mountains of the Appennino tosco emiliano, has such a varied natural landscape in its flora and fauna that always leaves people wide-mouthed!

Even if Abetone is mainly renowned for being a ski destination and thus most visited during the Winter season, this wonderful Tuscan attraction is amazingly beautiful during Summer also, when it's possible to organize guided (but not only) excursions along trekking paths on Libro Aperto slop, just to mention one. Recently, another kind of activity has become more and more popular: the mountain bike excursions, or as it’s called in “technical slang”, bike speed downhill, guided by experts of local paths.

Considered a word apart, the Downhill is a sport activity consisting in biking down the mountains sides along dedicated paths in the midst of nature, with different ascent metres.

This is the Gravity Park, a varied freeride paths circuit area studied for all those persons loving the two wheels high speed.

Who doesn’t remember of Hannibal, the famous warlord who tried in vain to conquer Rome for so long? Well, there’s a pass in Abetone area called Passo di Annibale (Hannibal’s pass) in honour of this dreaded adventurer who could enter the region of Tuscany (called Etruria at the time) through this gap.

A tribute to ski

For all Abetone goers, actually it wouldn’t be a new to know where the name of the 3 renowned Zeno slopes comes from. Zeno Colò was, in fact, the most famous Tuscan skier who lived during the second world war (he died in 1993) and created the 3 above mentioned slopes.

Ho to get to Abetone

To everyone who has the possibility to enjoy a ski day during the week, we strongly suggest to avoid the long queues of the weekends. However, if you prefer going by car, the easiest way to reach this ski resort is arriving at Lucca, Pistoia or Bagni di Lucca and then taking the highways to Abetone.